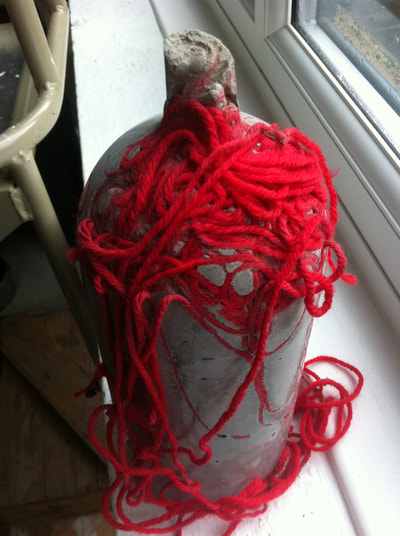 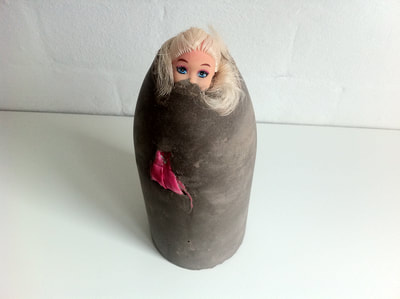 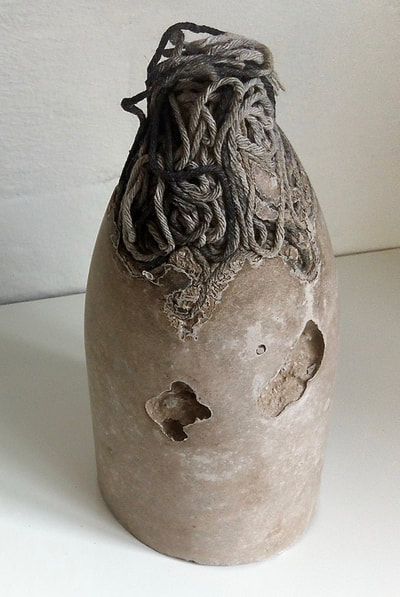 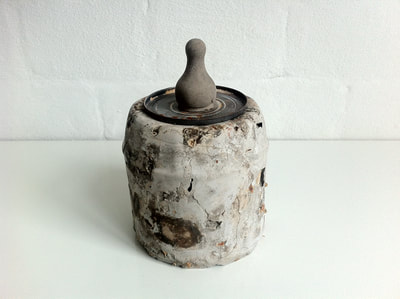 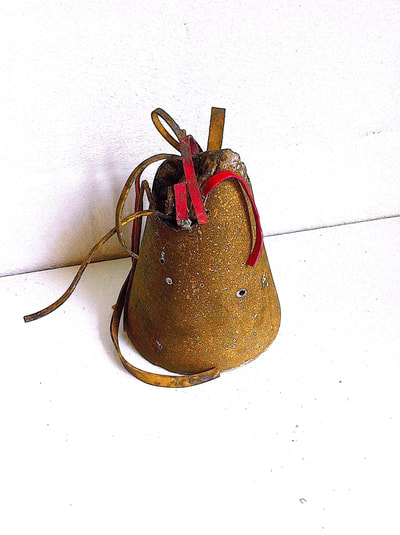 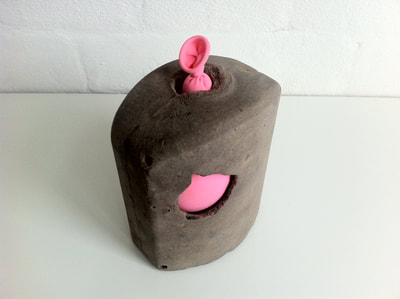 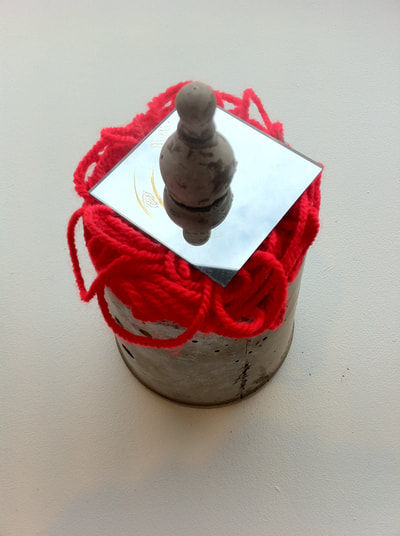 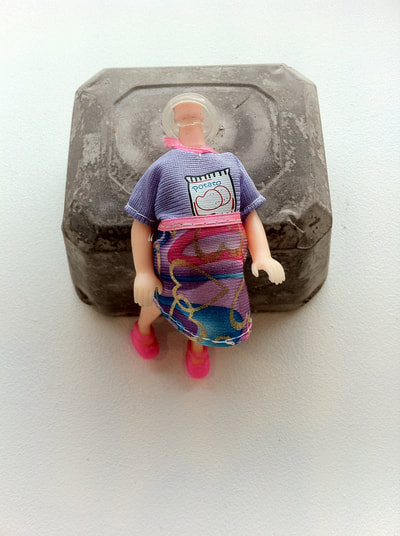 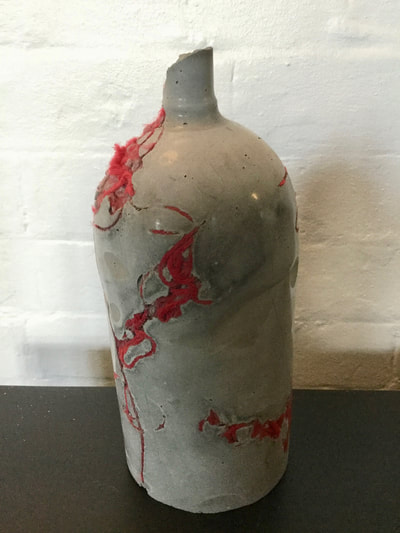 Concrete Objects 2018
Cement, Ash, Stuff.​
The group process often creates shared metaphors, and for the A Void (2018) project, the idea of ‘threads’ resonated and sparked a collective response. My initial ideas started with a reflection on the state of loneliness. We need connection and closeness to feel well and without proximity to others we suffer. Our defences against loss or absence of significant others may result in a need to avoid personal grief or ‘fill the void’. The drive to connect via social media platforms could be understood as a need to find a ‘lost object’, (Balick 2014). The concept of ‘internal objects’ is a psychodynamic term to describe early childhood relationships that become internalised or ‘introjected’.Learning that one is ‘held in the mind of another’ is a crucial developmental task of infants as they take steps towards independence and realise that their minds are separate from their caretakers. Social networks can provide us with a real/not real experience of always being in the mind of the other and never separate or apart (Balick 2014).

The concept of loneliness weaves and reappears through many of my artistic responses. The work in the A Void (2018) exhibition was made from a concrete mix of cement and ash from a wood burner. The weight of the material is significant as loss or emptiness can be experienced in the body as a heaviness. We often use words such as low, down, or depressed to describe this affect. The ash in the concrete adds a visual ingredient similar to wood fired pottery and the transformational element of fire contrasts and balances the weight of the concrete. I added ‘stuff’ to the concrete such as string and elastic bands which symbolise connection and attachment along with dummies and dolls that introduce familiar childhood objects. Concrete Objects (above) is a visual comment on the process of early internalised relationships from both a personal, professional and social perspective.

Reference
​Balick, A. The Psychodynamics of Social Networking: Connected-Up Instantaneous Culture and the Self (2014)
The need to continue a creative practice after qualifying as an art psychotherapist was the motivation for me to set up the Traces:The Unthought Known (2014) exhibition at the Darnley Gallery in Hackney. This was when Winnicott Wednesdays the more formal artist/ art psychotherapist collective was born. I created Lonely Cow (2014), who stands naked, exposed and alone in a vibrant but deserted landscape. The woman/creature looks directly at the viewer, vital but silenced without means of a voice, the telegraph poles symbolising a search for language or words to communicate.
“It really is spot on!”  Mary Beard
response to Lonely Cow (2014) in relation to The BBC programme The Public Voice of Women
The Scapegoat (2015) exhibition was an attempt to understand the process of blame in groups. The ritual of scapegoating is underpinned by the belief that substances or attributes can be transferred onto an object, animal or person. This type of sympathetic magical thinking supposes a connection ‘between apparently unconnected things and relies on a mythical worldview’ and a mythical world view relies on a belief ‘that there is no distinction between what is represented and what is real’ (Schaverien 1992).

We discussed boundaries and borders, countries and territories and how crossing them brings danger both for individuals such as refugees and for the breaking down of ‘imagined communities’ (Anderson 1991) and national identities. Rule Britannia (2010), an audio piece (above), asked you to listen to the long distance relationship the British have with their colonial past. Ruling the waves was a pertinent statement because the water metaphor is often employed to describe large movements of people. With the refugee crisis in 2015, words and pictures in the media summoned up images of natural disasters such as flooded and swamped, implicitly suggesting ‘agency, freedom and the power to transcend borders’. This framed the arrival of refugees as an assault on the nation and national identity. Images in the press were used to ‘embody a crisis and individuals labelled refugees become scapegoats for an imagined dilution of state power or conversely, nation building tactics’ (Mannik 2015). My other work in the show reflected these themes (below). 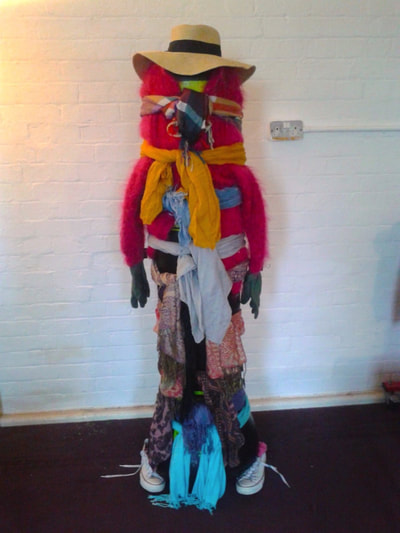 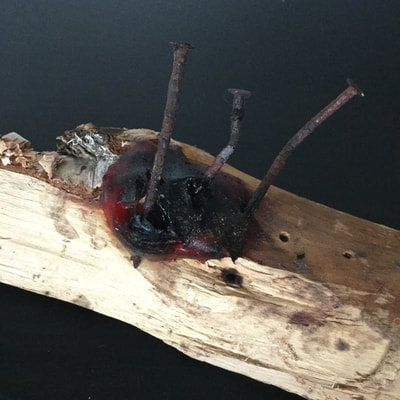 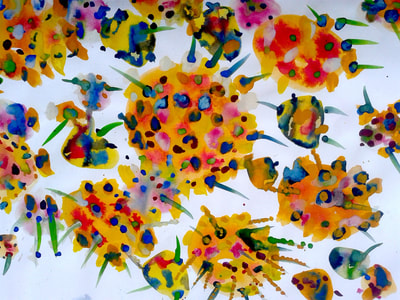 Pathegens (The Argument) 2015
Powered by