My art practise is an exploration of ‘Self’ in the process of becoming. Sartre (2003) argues that it is not possible to be completely self-aware as it would distract from engagement in the world. In keeping with Sartre my art practice provides me with an opportunity to capture my inner world, the fluidity of my emotional world and then retrospectively reflect upon it through the relationship I develop with my art objects.
​
Within this process, themes that have arisen include those of attachment, maternal relationships, intimacy, love, loss and societal ‘Rights of Passage’. All of which can be traced through pieces exhibited in Allowing (2014) and Scapegoat (2015). Since Scapegoat (2015)  and in holding in mind work for A-Void (2018), I have found myself re-focusing and re- familiarising myself with my identity, unpicking each of my titles as Mother, Wife, Daughter and Art Psychotherapist and what these mean for me both in relation to the values and ideas I was raised with as a child as well as within society as a whole and how the momentary currents of our present political circumstances are impacting us all. 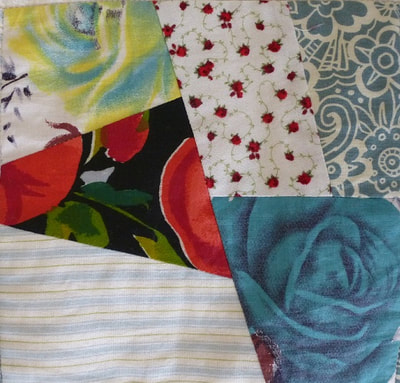 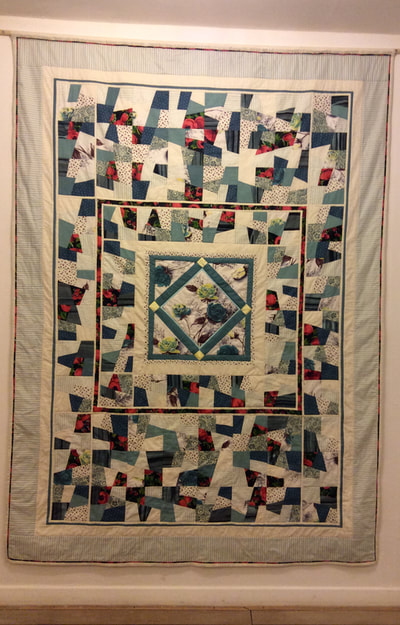 Memories (2014) explores the impression left in space after someone has gone. This piece (Above) was the stitching together of material from dresses made by my Grandmother. I used traditional techniques in quilt making and customs surrounding quilt making to explore the relationships between generations within families the forming of new relationships between generations, love and the coming together to celebrate past life, new life, current maternal and future maternal relationships and their importance and dynamic complexities.

Quilting traditions can be traced throughout  African, European and American history as having both a  functional role  as well as being aesthetic or artistic objects. These objects, often endowed with symbolic or religious meaning, held great sentimental value and were passed down through family generations. Quilting was often used a means of recording family traditions, heritage and lineage including the recording of family births, marriage and deaths, which were often presented as gifts to individuals at times of rite of passage.  Very popular in quilting tradition are the quilting circles and bees that brought women together to share quilting expertise. A quilting bee involved the gathering of friends and neighbours who come together to work on creating a quilt, which occasionally included each member creating squares around a joint theme.
My ‘Right’ Boob (2015) explores the birth of a new Mother. This is a print of my right breast and explores the fragility and vulnerability of being a new Mother, tensions between ‘feeling’ and ‘knowing’ about the ‘right’ way to love, nurture and  ‘parent’ and the sometimes conflicting information offered by other Mothers, professionals and literature.  This piece also explores ideas such as Winnicott’s ‘Good Enough Mother’ and Klein’s object relations of the ‘good/bad’ breast.
An Untitled See (2018) mono-print (below) explores the idea of A Void (2018) that is created in avoidance. This piece symbolically explores the idea that this ‘void’, a word which is often associated with emptiness, could actually be ‘full’, dynamic  and ‘powerful’  rather than empty. Avoidance becoming an uncontrollable force in itself reminding me of the sea.  How often the sea can represent  the unconscious and conscious and the tension between the two. The beautiful in despair, paradise next to nothingness and the separation between ideas, view points  and minds, people and continents.

A mono-print, is a print that can only be made once. I often experience a void between plate and print, in what I think the final image may be and what is reflected back to me. I find myself creating something from the position of not knowing. The important aspect of the work being, the ‘allowing’ of this to take place. Following each print the artist is able to make further changes to the plate allowing spontaneity to what is created but never the same image twice. This concept reminded me of Heracleitus;

"It’s not possible to step twice into the same river. They scatter and again combine and approach and separate’"
(Heracleitus of Ephesus cited in Friedman)

and the idea that in therapy we may revisit many parts of ourselves over and over, however each time it is from a different view point. As an Art Psychotherapist I continually work with the concept of ‘not knowing’ and the importance of being able to sit with and tolerate this. The Untitled See (2018) represents a body of work that has pushed me to sit with the ‘not knowing’ within myself and symbolically represents a grappling with the fear of the un-known.

For me the void is the exploration of self. It is the exploring of the self as a relation that ‘relates itself to itself’ (Kierkegaard 1849).  Through art I capture the confusing unconscious contradictions that constitute my inner world in an attempt to resolve instabilities that cause despair.  This is the process of exploring self becoming through the emotional void of my existential position. 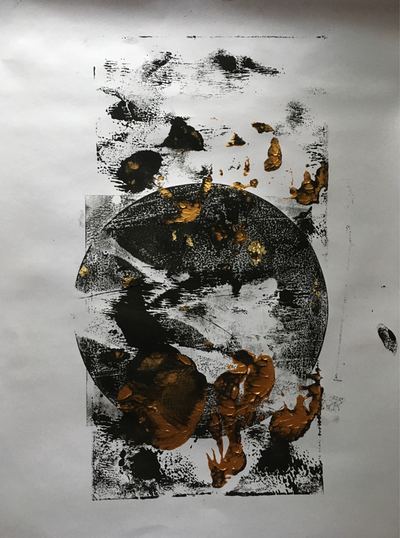 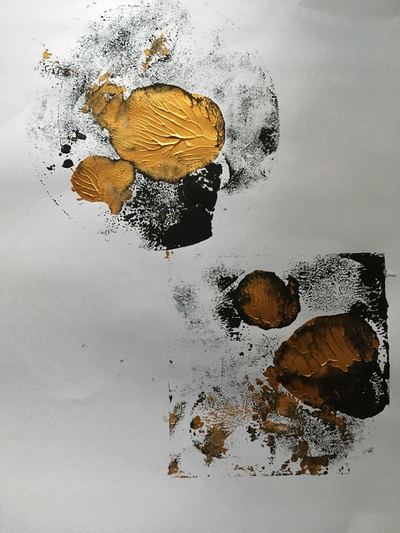 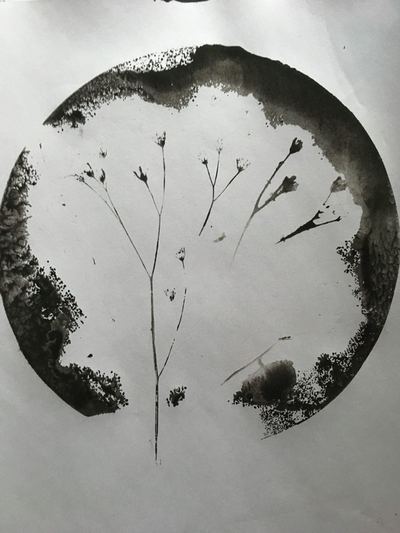 My current art practice encompasses different types print making, in particular mono-printing. Mono printing is a form of print making that is comprised of marks, lines or images that can only be made once.  Mono printing allows considerable freedom to the artist, who can work negatively by removing ink or positively, by adding ink to the plate.  Following each print the artist is able to repeat this process to the plate allowing a spontaneous quality to a series of prints. With anything new, it has felt un-mastered, disappointing and yet immersing and full of possibilities.  As with what feels like forging a new path, the process of creating a print is often not what I pictured in my mind, anticipated and most importantly planned.

Themes arising in this body of work explore the tensions within me, of letting go of an image in my head that I would like to create and allowing the spontaneity of the process to be.  The struggle between control and expectation and freedom and fluidity. I am exploring the tension between being ‘stuck’ and letting go, my successes and mistakes, the sweetness and bitterness. The process mirroring the absence of knowing and challenging my pre-existing ideas of what a Mother, a wife, a daughter ‘should be’ and what she ‘could be’ and attempting to find peace with this. 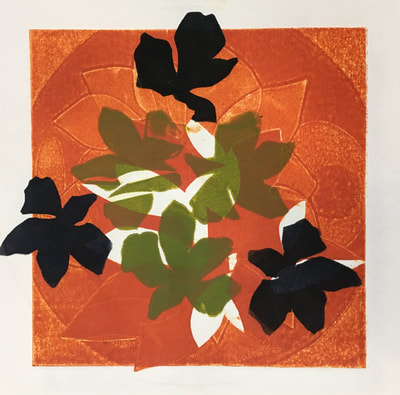 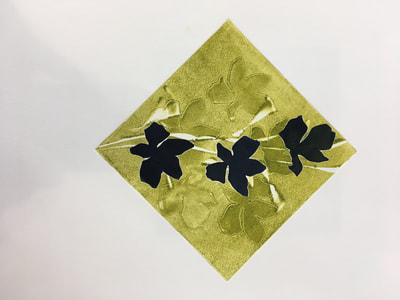 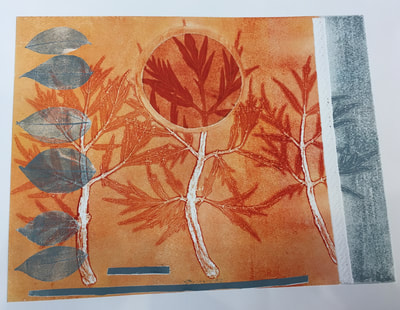 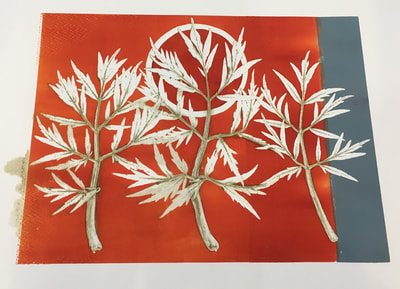