​My artwork revolves around animal symbolism, folklore and self-expression, exploring how these link to the wider world and the political/social climate. The animal images come to represent different aspects of identity, internalised relationships and experiences, including partially processed and unconscious associations.  The meanings of animal images are often complex and vary vastly within different cultures.
Artwork for the A Void Exhibition

When working on an image for this exhibition, I was originally drawn to moths and how they fly towards light bulbs mistaking it for the light of the moon as the theory goes. Originally I was thinking of how people are drawn to things that attempt to fill a sense of a gap or ways to avoid the feelings that arise in the spaces between, such as interacting constantly on phones, sugar, coffee, alcohol, cigarettes and so on. I had an image of repeatedly bumping into something mistaking it for what was really needed. This developed into seeing the moon behind the light bulb as a steady, predictable presence, relating to a kind of ‘secure base’ in attachment theory (Bowlby, 1988), the spaces between the moths, marking the voids between us, full of texture and matter rather than empty. Wherever you are in the world the moon provides connection to a universal symbol, mapping time with the eb and flow of tides and skies as the world turns on its axis. So this image highlights two sides - connection and disconnection, which perhaps links to many shared experiences in relation to phones/social media and political shifts in recent years. The moth also represents transformation due to its extreme changes in its lifecycle, making me think of the shifts that happen at times of upheaval. 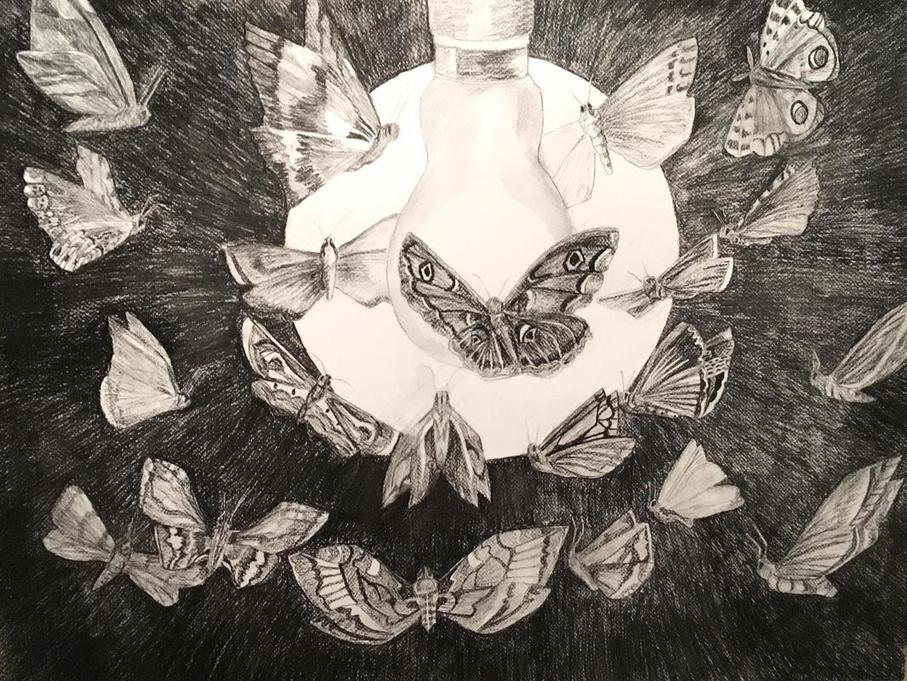